The least cognizant phylum on Earth. 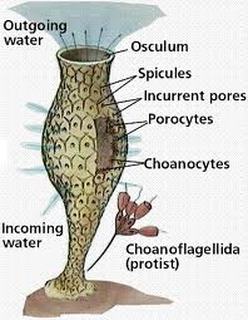 The phylum Porifera consists mainly of marine sponges. Sponges are organisms consisting of  many loosely connected cells, halting it from production of any tissues, or any organs or complex organ systems. It's name comes from the Latin roots "porus," which translates to pores, and "ferre," which means to bear. These simple multicellular organisms technically have no complicated organ systems. There are four classes, the glass sponges (Hexactinellida), the calcareous sponges (Calcarea), the demosponges (Demospongiae), and the recently recognized Homoscleromorpha sponges . In these four different categories include more than 5,000 different species of Porifera.

Sponges contain system of pores called ostia, surface openings of canals in sponges that allow for the flow of water. Specialized cells called choanocytes(collar cells) induce the flow of water through the beating of flagellae.   Protein collagen and spicules form the basic skeleton of sponges.Depending on the class of sponges examined, the porous structure may  be calcareous or siliceous.

Members of the Porifera phylum have no distinct nervous system compared to other organisms. They have no brain or nerve cells. They rely on water intake and out put for oxygen intake, waste removal and digestion. They have little reaction towards their physical environment besides the capture of food particles, in the form of bacteria and plankton, in the water that are captured by spicule fibers found throughout the surface of the sponge's structure. 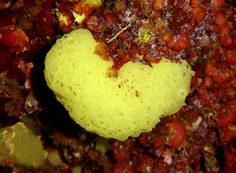 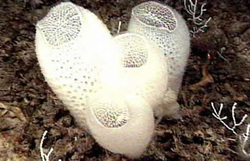 Venus' Flower Basket (Glass Sponge)
The glass sponge Euplectella aspergillum, also known as Venus' Flower Basket, is a deep sea sponge. This unique sponge converts silicic acid from sea water into silica which makes up its interestingly glass like yet firm fibers. This sponge symbiotically houses two shrimp which inhabit the sponge, cleaning it in return for food particles being discarded as waste for the shrimp to consume. No nervous system is apparent in the Venus' Flower Basket as a sponge of the Porifera phylum. 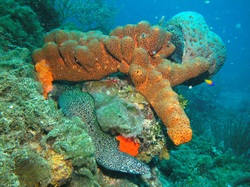 Agelas conifera (Demosponge)
The demosponge known as Agelas conifera is characterized by it laterally fused tubes arising from a single base. The sponge grows in an antler like fashion, with clubs growing on top older ones like branches.The spicules are classified as acanthostyles; having a spiny structure. Tubes run throughout this commonly orange sponge and inhabit the same classification of all Porifera; having no nervous system.
Powered by