One of the smaller Phyla of this journey

The Phylum of Platyhelminthes, also known as the Flatworm Phylum, consists of around 5,000 species of flatworms that spend most of their time on the seafloor. They are somewhat simple when compared with the other phyla covered, for they lack a vertebrate. They also lack very intricate respiratory and circulatory systems. Their nervous systems have to be complex to a degree, though, because most of the flatworm species have parasitic duties, and in order to successfully carry out the actions of a parasite, one would need at least more than a very simple nervous system and sensory abilities. Also, a complex nervous system is needed because a lot of flatworm species prey on other animals for food.

Platyhelminthes species tend to come in many different colors, some of which are used to ward off animals that may eat them, a lot of which signaling poison. The Platyhelminthes might have had to enact its nervous system in a very active way to tell itself about the outside world, which would then let it warn others about poison and things of that nature. 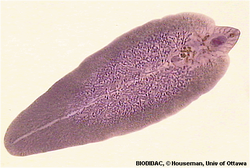 Trematoda- The Trematoda is a class of the Platyhelminthes Phylum. The Trematoda has several large nerve masses that are located in the areas around the head, and the connections that run from these nerve masses travel all throughout the body to the end of the animal, which is near where the tail resides. Most of the sensory functions of the Trematoda are general, and there are very few distinct things about the sensory operations of the Trematoda, less so than other classes. 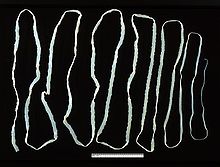 Cestoda- The Cestoda is a class of the Platyhelminthes Phylum. Its nervous system is somewhat simple, and the amount of nerve endings that it has is directly related to the scolex that is present in the Cestoda. A scolex is like a sensory detector, and the more scolex a Cestoda has, the more distinguished, intricate, and advanced the nervous system of the Cestoda is. 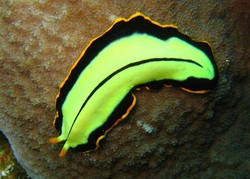 Turbellaria- The Tubellaria is a class of the Platyhelminthes Phylum. Its nervous system that centers around the head area. The nerves for the system are most numerous around the head. Its brain complexity may vary between species, with some having slightly complex brains, and others having simple ones. It is special in that no major nerve masses exist around the entire body other than the areas centralized around the head. A lot of the sensory areas are around the edges of the body, and a lot of the nervous system in some Turbellaria are to some degree similar to the Cnidaria Phylum.
Powered by