Is a Nematode a cross breed of a clown fish and a toad?

Nematodes, or roundworms are considered to be part of the phylum Nematoda, also known as Nemathelminthes. Out of the 1 million estimated species of nematodes  only 28,000 have been identified and distinguished  16,000 of the species found are considered to be parasites. Nematodes are distinguished from flatworms and cnidarians and flatworms through their tubular digestive systems with openings on both ends of the body.

The nervous systems of organisms of Phylum Nematoda are quite basic yet hold great importance. Around one third of a nematode's cells are nerve cells called ganglia. The equivalent of a brain; a dense, circular nerve ring surrounding the pharynx located in the anterior part of the organism. Four main peripheral nerves run along the dorsal, ventral, and lateral lengths of the organism, with the ventral nerve being the larger and more powerful receptor. Smaller nerves run from the  main nerve ring to supplement the sensory organs of the head. The dorsal nerve controls mobility, lateral nerves are sensory, and ventral nerves are capable of both functions. Each nerve lies within a cord of connective tissue lying beneath the cuticle and muscle cells.

Nematodes are covered with numerous bristles and papillae allowing for sensory functions. Two amphids lie behind bristles located on the head. The pits are supplied with nerve cells and seem to be chemical receptors. A few aquatic nematodes possess what appear to bepigmented eye-spots, but is unclear whether or not these are actually sensory in nature.[33] 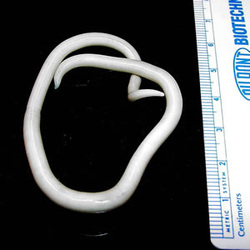 Ascaris lumbricoides (Ascarids)
Ascaris lumbricoides, or the giant round worm, is a fine example of a parasitic Nematode. This specific Ascarid inhabits a human's smaller intestine, feeding off of food the host had consumed. As a parasite, it uses its nervous system traveling through he digestive tract of the host and acquiring nourishment from the host. The digression of this parasite from nematode standards is its lack of amphids. Other than that they fulfill the overall basics of a nematode with the four nerves. 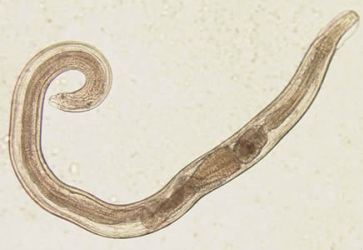 Enterobius (Filarias, Hookworms, Pinworms)
Enterobious, or the pin worm or hook worm, is a blood sucking parasite known to feed of off a human's blood from the smaller intestine. In order to reach the smaller intestine after entering the human body, it uses its nervous system to travel up the lungs and and down the esophagus through the four collaborating nerves it has. However, it does contain amphids that sense chemicals, unlike Ascarid parasites. 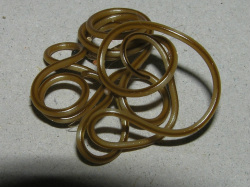 Mermis nigrescens
The round worm Mermis negriscens peculiarly contain eye spots sensing light in the process of birth for females in addition to their similar nervous systems.  This species is one of the few known nematodes to have more advanced sensory organs providing light sensory. Such differences between nematodes occurs in the different environments in which they thrive in. This one roundworm species lives outdoors and not in the confines of an organic host as parasitic nematodes do. In the outer world, such eye spots would be necessary for survival and therefore are present.