Like a headless chicken may run around, the nerves in an echinoderm still work without a brain.

The Phylum of Echinodermata consists of marine animals which include starfish, sea urchins, sand dollars, and sea cucumbers among 7000 different species. Echinoderms are known for their unique five-fold symmetry and their abilities of regeneration of limbs and wounded surfaces. They use tube feet to slowly trek along the sea floor for prey.
The nervous system of Echinoderms can be considered complex. However, Echinoderms do not have a central brain. Echinoderms all have a network of nerves called nerve plexus. These nerves run intertwined under the surface of an Echinoderm's skin. Although the echinoderms do not have many well-defined sensory inputs, they are sensitive to touch, light, temperature, orientation, and the status of water around them. Sense is cause by sensitivity in the tube feet of Echinoderms which line the undersides of their bodies and eye spots located throughout the body. The eye spots each consist of a mass of ocelli, consisting of pigmented epithelial cells that respond to light intensity, and are lined with sensory cells in between them. Each ocellus is covered by a  cuticle that both protects them through it thickness and acts as a lens with its transparency. 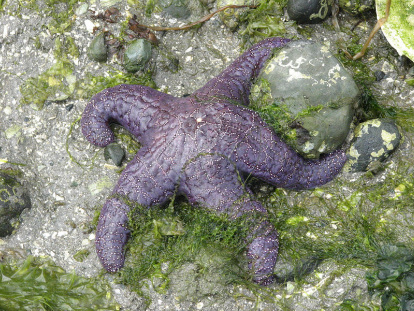 Pisaster ochraceus (Star Fish)
The star fish is categorized as having a central core located around its mouth/anus with multiple arms branching out of it numbering from normally 5 to the rare 50. Pisaster ochraceus of the Asteroidea Class also known as the purple sea star or ochre sea star has 5 limbs.

In a starfish like mentioned, a central nerve ring presently lines the esophagus which sends radial nerves into each of the arms, often parallel with the branches of the water vascular system. The ring nerves and radial nerves coordinate the sea star's balance and directional systems. The tube feet, spines, and pedicellariae found on sea stars are sensitive to touch, while light sensitivity is felt by eye spots. Eye spots number from 80 to 200 on each end of a star fish's arm.  In locating odor sources, such as food. tube feet at the tips of the rays are sensitive to chemicals excreted by consumables. In addition to their eye spots, many starfish also possess individual photo receptor cells throughout their body allowing them to  sense light even when their eye spots are incapable of proper function.

In the incomparable feat of the regeneration of limbs, as well as the capability of regrowth of a whole starfish from a single limb, the nervous system plays a great role in a incomplete starfish's survival. Initial loss of limbs may be caused by an act of autotomy, in which connective tissues in limbs grasped by predators quickly deteriorate and detach. This is due to sensory signals sent out from the nervous system. 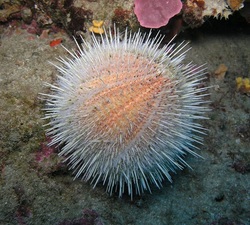 Echinus melo (Sea Urchin)
Sea urchins are mainly divided into the two classes of  Echinoida and Cidaroida and are characterized by their globular shape and their defensive array of spines branching out from its endoskeleton, only leaving the mouth measurably vulnerable.

A sea urchin like Echinus melo has a relatively simple layout for its nervous system. Comparably other Echinoderms, there is no brain. The nerve system however does stem from a central nerve ring located around the lantern of the sea urchin. Five nerves radiate underneath the radial canals of the water vascular system, branching out from the nerve ring. These nerves then branch into small nerve points ending in the tube feet, spines, and pedicellariae of the urchin, similarly to other Echinoderms.

Through their sensory nerves, sea urchins are sensitive to touch, light, and chemicals. Instead of eye spots like starfish, it is believed that sea urchins have a single compound eye, using its spikes to sense and depict its surroundings. Stacocysts called spheridia, sense the position of sea urchins in comparison to the surfaces they are present on through reactions to gravity. These sensory organs send out neurons alerting the sea urchin of its exposure, making it take action and to re-position its body upright. 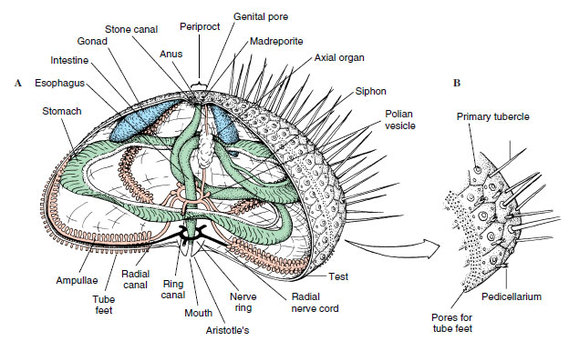 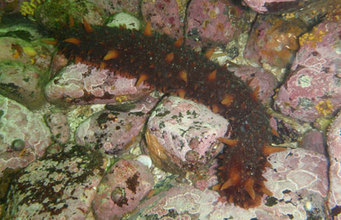 The sea cucumber is like every other Echinoderm, as it lacks a central functioning brain and relays on five nerves extending from a central nerve ring around the pharynx that relay signals throughout the sea cucumber. The sea cucumber, an exception to starfish and sea urchins, has no additional sensory organs. The order Apodida of sea cucumbers does however have species with statocysts. 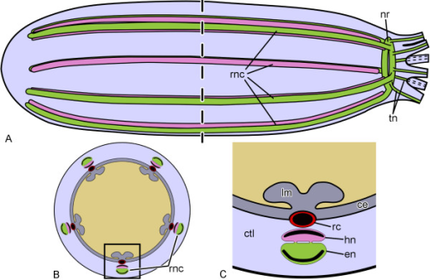