Here we will see the phylum of Annelida which is a large phylum of over 22,000 species and consists of segmented worms 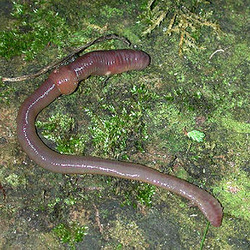 The phylum Annelida, contains species of segmented worms which live in most environments which can either be aquatic of terrestrial habitats. They use a method of peristalsis in order to move which is a rapid contraction and expansion of muscles in order to propel forward. Annelids are made up of segments, with each segments containing identical organs necessary to carry out life functions which is why annelids are able to survive when split into segments. Species of the Annelida phylum include rag worms, earth worms, and leeches.

The Nervous System of Annelids consists of a usually single sectioned brain above the pharynx and simple ganglia, or control centers, above an below the pharynx which are connected by nerve chords. For those Annelids which have a more complex system of movement like rag worms, have a more complex brain structure with a defined front, middle, and back sections. The rest of the nervous system is very "ladder-like" in that the nerve chords run down the rest of the body with nerve nodes in each segment in order to control segment processes.
Earth worm

Rag worm- these annelids are unique in that they have a more complex brain structure than most annelid species with three distinct sections which is theorized to emerge from their complex locomotion. 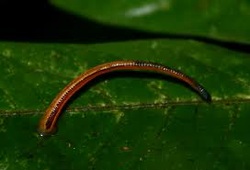 Leech- leeches are similar to most annelid species in that they have segmented body parts. They live in very aquatic environments and must consume the blood of a host in order to survive.
Powered by